Under the federal system, laws related to the same subject are “codified”— structured as a cohesive law that governs a particular subject. The consolidated codified law in the US is known as the United States Code or USC for short. Title 26 of the USC covers tax laws and is known as the Internal Revenue Code. It is cited as “26 USC” or simply by its name, the Internal Revenue Code or IRC.

The IRC provides the foundation of all federal tax authority in the United States and is the ultimate authority when researching federal tax law issues. The IRC is interpreted by Treasury regulations, cases that interpret the laws, and IRS rulings.

The IRC is supplemented by individual laws passed by Congress.These individual laws are all assigned a Public Law number (P.L.) and published in the Statutes at Large. These individual laws amend the IRC, but include extra information such as effective dates, transitional rules, and special rules that are not formally included in the codified IRC. These extraneous rules are often referred to as non code provisions.

The US Code Service republishes Title 26 every year in six softbound volumes.

The United States Code Annotated is available on Westlaw in the Computer Labs. 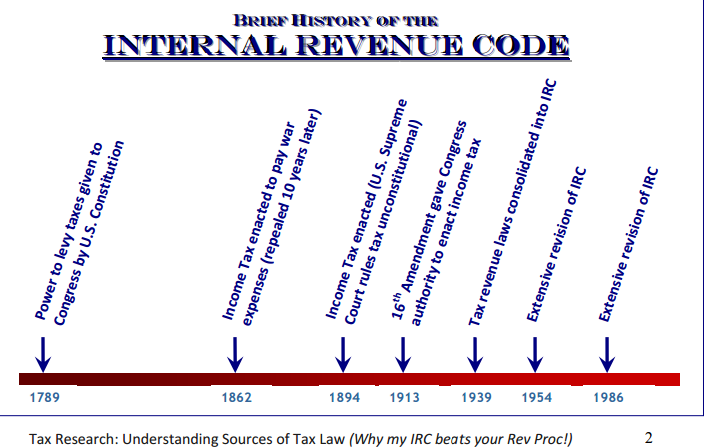 Citing to the Internal Revenue Code

According to The Bluebook : A Uniform System of Citation, Rule 12.9.1, for citations to the Internal Revenue Code, 26 U.S.C. may be replaced with I.R.C.