Note that, once you have done a search in Lexis Advance or Westlaw, you can narrow your results down to a certain court, for example, the 10th Dist. Court of Appeals.

Ohio Cases on the Free Web 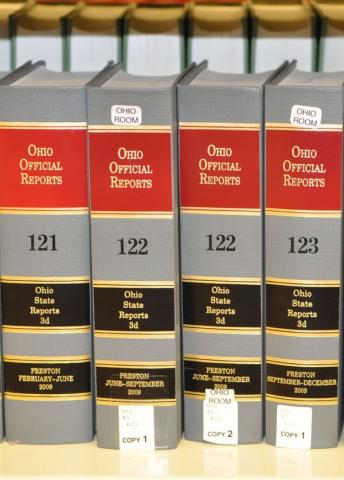 Cases are considered reported if they are in the Ohio Official Reports.  See reported v. unreported cases, below, to see what this distinction means.

The Ohio Supreme Court designated the Supreme Court website as the Ohio Official Reports for opinions of the courts of appeals and the Court of Claims as of July 1, 2012.  See Rules for Reporting Opinions, Rule 3.2  .

Prior Series of Ohio Official Reports, in Reverse Chronological Order:

If a decision appears in an official reporter (Ohio Official Reporter or Ohio Reports), it is a "reported" decision. Generally, all Ohio Supreme Court decisions are "reported". The Reporter of Decisions decides which appellate and municipal cases appear in the Ohio Official Reports. See Rules for Reporting Opinions.

In the past, reported decisions were controlling authority in the district, and "unreported" opinions were merely "persuasive", meaning they are controlling only as to the parties. Prior versions of the Supreme Court Rules for Reporting opinions stated that unreported opinions "may be" cited in limited circumstances.

As of May 1, 2002, the Supreme Court abolished the distinction between "controlling" and "persuasive" opinions, based merely upon whether a case appears in the Official Reporter. Opinions for all cases decided on and after May 1, 2002 may be cited as legal authority and "weighted as deemed appropriate by the courts" See Rules for Reporting Opinions, Rule 3.4 .  The Supreme Court designated the Supreme Court website as the Ohio Official Reports for opinions of the courts of appeals and the Court of Claims as of July 1, 2012.  See Rules for Reporting Opinions, Rule 3.2  .

(Some interpret this as all appellate opinions since May 1, 2002 are now controlling because all are published on the web and because the comments to Rules for Reporting Opinions, Rule 4 say "The Committee recognized the concern that with the designations abolished, and all appellate opinions are "controlling," there is some burden on the practitioner to sift through the large number of opinions to find those that are the best precendent". However, Rule 4 itself says "All court of appeals opinions issued after the effective date of these rules may be cited as legal authority and weighted as deemed appropriate by the courts. "  In 2012, Rule 4 was amended and renumbered Rule 3.4, and also says "weighted as deemed appropriate by the courts."  )

Ohio Revised Code 2503.20 still states that, "All such cases shall be reported in accordance with this section before they are recognized by and receive the official sanction of any court."

Also Covered in this Guide

A video called Going to Court by the Ohio State Bar Association is helpful.

There are lots of unofficial reporters, many of which are no longer published. Take a look at How to Read a Legal Citation, for a list of common Ohio case reporters and their abbreviations. You can type the name of the case reporter into Library World to find the call number of the print reporter.

One unofficial reporter that is still published currently is North Eastern Reporter, now in its second series, KF 135 .N62. The Franklin County Law Library no longer has a full run of this reporter in printer, but it is available on Westlaw in the computer labs. It includes Ohio Supreme Court and appellate decisions for Ohio and other northeast states. Volumes include West headnotes, which can help find more cases dealing with the same legal issue.

For a list of unofficial reporters, see Ohio Case Law: Where to Find It by the Ohio Supreme Court Law Library. The following articles discuss some of these unofficial case reporters: Ervin H.Pollack and J. Russell Leach, Ohio's Reported Decisions -- An Integrated Survey , 11 Ohio State Law Journal 413 (1950) and Paul Richert, An Update on Judicial Reporting , 41 Ohio State Law Journal 675 (1980). Pdf versions of these articles are attached below.